he’s dying … does that mean he gets a pass?

he’s dying … does that mean he gets a pass?

He’s dying, is a line from the movie Kodachrome – film on Netflix. The line implies that even through he was a difficult person you should put that aside and spend time with him.

If family relationships weren’t so challenging, and if we didn’t have such a difficult time talking about and preparing for death, spending time with a dying family member might not be a big ask.  Sadly, however, they are, and we do. In Kodachrome, Matt Ryder reluctantly drives his dying father, to whom Matt hasn’t spoken in ten years, across the country to the last photo shop in America that can still process the father’s decades-old rolls of undeveloped Kodachrome film.

The set-up from Wikipedia – Matt Ryder is an A&R representative at a record label who is in danger of losing his job after his company’s biggest client signs with another label. His father’s assistant and nurse Zooey Kern arrives at his office and informs him that his father Ben, a famous photographer, is terminally ill. Though they have not spoken in over ten years, Ben has requested that Matt drive him to Dwayne’s Photo in Parsons, Kansas, the last shop that still develops Kodachrome film. Ben has several undeveloped rolls he wants to have processed before he dies, and Dwayne’s will stop in the near future because Kodak no longer makes the required dyes.

The Jewish prayer of Mourning

By Lis L Griffin on | Categories: discussion and information around death, music 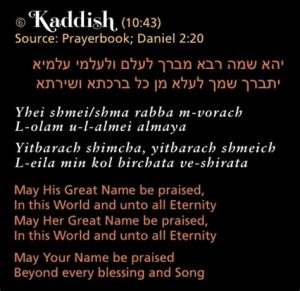 How do we hold space for the deep losses we as individuals and as a community feel. The traditional Jewish prayer of mourning, the Kaddish a prayer traditional recited for the dead.

When death happens – Alan Watts how we discuss death

By Lis L Griffin on | Categories: discussion and information around death, Videos

Our Grief and it’s different paths

By Lis L Griffin on | Categories: talks on grief

We all grief differently and here is another perspective from a Tedx Talk by Aarti Patil.

From Tedx Talks – Grief is a difficult, and long process but it is not the same for everyone. It’s a unique path that is different for each and every person. Aarti Patil is a Nursing and Public Health major at the University of Texas at Arlington. As the daughter and the sister of UTA alumni, Aarti has immersed herself in her Maverick pride through her involvement in the MavElite Tour Guides, Freshmen Leaders on Campus, Maverick Mentors, and the UTA Ambassadors. Aarti is eternally grateful to her father, Uday, and her sister, Devika, for their immense support and love. A part from being a full-time student, Aarti continues to pursue her part-time air guitar career.

If I Die Young

Song played at funeral by The Band Perry

If I die young, bury me in satin. Lay me down on a bed of roses. Sink me in the river.

Lord, make me a rainbow. I’ll shine down on my mother. She’ll know I’m safe with you when she stands under my colors.